Orthogonal Research and Education Laboratory
Advent of an Organization-wide Open Science System
​Myself, Represented Orthogonally
From January 2014 to November 2014, my primary affiliation was as Primary Investigator at Orthogonal Research [1]. Upon running out of funding at my previous position (Cellular Reprogramming Lab at Michigan State University), I decided to formally found an academic start-up. The idea was to have an affiliation and continue doing research while looking for a more formal position. However, with an open mind, an interest in research innovation, and some background in research commercialization, I decided to turn this into a more formal opportunity. I managed to turn out several papers, become a formal grant-making institute, and begin a long-term, large-scale distributed collaboration (DevoWorm). 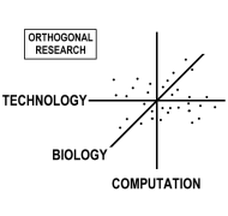 Orthogonal Research also serves as an organizational identity and secondary affiliation (much as some academics are “Chief Science Officers” at a start-up). I generated a number of reports to document the activities of an “academic start-up”. This was stylized in the form of Quarterly Reports, which were based on three month intervals of the calendar year and summarized my academic activities during the period in question. These reports (for 2014 calendar year) can be downloaded here: Q1, Q2, Q3, Q4.
Why call it a “Start-up”?
Why do I call it an academic start-up? Three things distinguish this from a more traditional start-up: fundraising, non-tangible vs. tangible outcomes, and business plan. While regular start-ups have multiple rounds of fundraising, the academic start-up is a bit more flexible. We can use cross-subsidization, grant money, and crowdsourcing [2] as a starting point. It is harder to fundraise when you have many non-tangible outcomes. The quarterly reports stress the tangible outcomes (papers, presentations, peer reviewing). However, academic work (particularly of the scientific variety) involves significant learning, internalization, experimentation, and reflection. Because of this flexibility and departure from conventional business thinking, the academic start-up does not operate by means of a formal business plan. In the case of Orthogonal, a path forward was made through exploration, tying up the loose ends of previous research, and working with collaborators to generate new productivity. In a sense, an academic start-up is a lot like a creative web endeavor such as programming a YouTube channel or administering blog content
​(which is part of the Orthogonal Research portfolio). 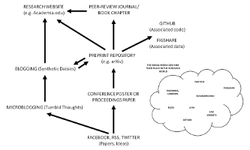 The workflow and productivity of an academic start-up, enabled by information technology.
Things I learned from this experience
1. There are significant economic “barriers to entry” in the field of research. As I was aware when starting Orthogonal, the University provides much of this infrastructure at significantly reduced cost. A University affiliation is to benefit from numbers (of fellow researchers) and (institutional) prestige. Orthogonal Research occupies a space in which the barriers to entry have fallen enough to do research at a very low cost (e.g. secondary analyses, modeling and simulation, collaborations, theory-building).

2. There is a need to combine academic start-ups with alternative funding methods [3], particularly for researchers who and projects that do not fit in well at more traditional academic institutions. Alternately, an academic start-up can be used as an auxiliary affiliation, to conduct work and collaborations outside the scope of one’s Uni affiliation. In any case, this might serve the research workforce and local Universities well, much as research parks can have a synergistic effect with the University. While not everyone will agree that such partnerships are a good development, the small-scale nature of my initiative provides an avenue for high-risk or hybrid projects. Particularly when cross-subsidized, academic start-up might actually catalyze research innovation by not forcing research to conform to any single model.
​
3. What happens when a large number of independent researchers all have their own organizations, whether or not it is registered as a LLC? They can do things such as share equipment and resources, broker agreements with the local Uni, and provide collaborative support to each other. Here are two examples of how this has become more common:
a. one of my long-term collaborators (Dr. Steven Suhr) is in the process of starting up a biotech/ gene construct business called Biomilab LLC. Part of the purpose for this is to match an impressive skill set with resources that are outside the scope of traditional Uni research opportunities and funding regimes. While he is independent, he also collaborates with with University-affiliated people.

b. in the DevoWorm project, none of the collaborators (excluding myself) have a formal academic affiliation beyond graduate student. One is affiliated with a start-up calledMetaCell, LLC, another is the proprietor of New Light Industries, Ltd., and a third is retired from academia but affiliated with Gulf Specimen Marine Lab (non-profit educational institute) in Florida.

NOTES:
[1] “Orthogonal” means “at right angles”, “perpendicular”, or alternately, “statistical independence”. I chose this name to reflect the diverse research I have been fortunate enough to engage in over the years (a fair amount of it in the areas of mathematical and computational modeling). While my research work typically represents an interdisciplinary synthesis, there is always the feeling that the different components are “perpendicular” or “statistically independent” to one another. There is also referential meaning in the oddly- defined relationship between “Independent” and “Affiliated” research.

[2] My feelings about crowdsourcing are mixed. On the one hand, it is a good way to raise money quickly, and it is catching on amongst researchers. On the other hand, there is a tangibility (or hipster) bias, and (at least to me) resembles an inbred capital market (see below). 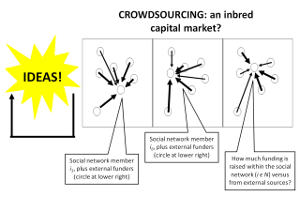 ​Diagram of an inbred capital market, or, “why do seemingly ridiculous Kickstarter projects raise large sums of money”. Distinct from the phenomena of large corporate entities using the idle time of social groups for fun and profit.
​
[3] My forays into alternative funding methods have been largely theoretical. However, check out my stock presentation on the topic (from January 2013, so it might be time for a revision). It is called “A New Route to Science Innovation“, and lays out the visionary case for the why and how with respect to the alternative funding of science research.